In the last century, in the late 1920s, a dance rose up in Harlem. This was the original dance to swing music: the Lindy Hop. The African-American population in Harlem, an immigrant district in Upper Manhattan in New York City, had recently quadrupled after much of the Eastern European and German Jewish community left the neighborhood. Times were hard, and for economic reasons musicians joined together into big bands. These bands played Swing music, which evolved from early Jazz and embodied the boisterous, swingin’ attitude of its African roots, but played on European instruments – quite the novelty! This exciting African-American music, dance, and lifestyle spread across the Western world, starting its flight in Harlem.

Like Swing music, Swing dance also emerged from the rooting of African-American dance and lifestyle in the Western world’s cultural seedbed in the later 1920s. The roots of Lindy Hop, and thus Swing dance as a whole, can be found in Harlem, where the dances of the era melted together to emerge as something new. Formal dance positions and meters fused with African rhythms and African-American Jazz dances ranging from Charleston and Foxtrot to Breakaway and Tap, often spiced up with comic elements and parody. 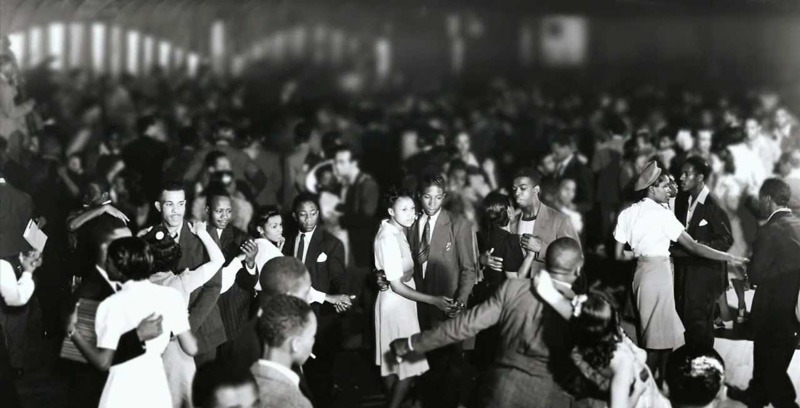 The Savoy Ballroom held a very special position in Harlem nightlife. Absolutely enormous, at the time of its opening it was one of the very few places where people of all races and classes could come together to share their love of music and dance. Here, the social standards of the time were confronted with popular creativity and an exuberant spirit of community and joy – every night of the week, 50¢ weekdays and 75¢ on the weekend (adjusted for inflation, this was about 11-17 dollars, or 9-13 euros).

The cloakroom could hold 5,000, and the club welcomed an estimated 70,000 guests a year. Harlem’s first dance location was “a luxury ballroom to accommodate the many thousands who wished to dance in an atmosphere of tasteful refinement, rather than in the small stuffy halls and the foul smelling, smoke laden cellar nightclubs.”

The Birth Of Lindy Hop

The 15×60-meter dance floor (almost as big as two whole basketball courts) was the site of jams that merged different dance cultures to the hot sounds of the fresh new Big Bands. The polished maple floorboards had to be replaced every three years due to constant use. The Savoy even had two bandstands in order to make sure the music never stopped. Soon, the Big Bands started battling, delivering legendary musical competitions between Chick Webb’s Big Band and the bands of Benny Goodman, Count Basie, and Duke Ellington – while on the dance floor the Lindy Hop of Leon James, Leroy Jones, “Shorty George” Snowden, and later Frankie Manning became ever more elaborate.

Paradoxically, many of Harlem’s most famous clubs, including Small’s and the Cotton Club, barred blacks from entering as guests for many years, while their stages predominantly featured African-American artists. Things were different in the Savoy Ballroom, with blacks and whites of all social stations meeting to dance as early as 1926. This became the epicenter of the nascent swing dance Lindy Hop, the place where it was established and polished with joy, spontaneity, and diversity. Swing music also continued to develop – hand-in-hand with the dance. Big band competitions were held alongside dance competitions, the symbiosis inspiring dancers and musicians alike. Evening after evening, moves and different styles were thrown down with a liveliness that quickened the hearts of dancers and observers equally.

In its early stages, the dance was lackadaisically called nothing more than the “hop”, slang for dance. However, a reference to Charles Lindberg’s solo flight across the Atlantic in 1927, inspired by the newspaper headline “Lindy Hops the Atlantic”, soon had the dance dubbed the Lindy Hop. This iconic name imbued the movement with the sparkle of the modern era and the heroic joining of the continents – it was here to stay!

During the 1930s, the Lindy Hop spread rapidly throughout the world, carried by newly popular radio devices and touted by the white media as the “Jitterbug”. It took a while for whites to find their own authentic approach to the originally African-American dance and music style. Initially, awkward attempts by the budding music industry to sell poorly played jazz that didn’t swing and sell it as a white accomplishment under the name of “Jass” justly failed, until – led prominently by Benny Goodman – they also learned to swing. In Hollywood, the Lindy Hop began to evolve into West Coast Swing. In the 1950s and 1960s, Rock’n’Roll, boogie-woogie, and rhythm&blues also became widely danced variations. In Europe, swing rhythms were adopted by gypsies in the late 1920s in France and turned into Manouche Jazz, a style made popular in the 1930s by Django Reinhart and others.

A social dance, Lindy Hop is danced as a couple and is based upon leading and following techniques – with fun, improvisation, and above all music interpretation in the foreground. In many ways, the dancing couple and the music are also part of a lead and follow rapport, with the dance influencing musical development and musicians reaching out at concerts to rhythmically seize the dancers and emphasize their movements. This interweaving of music and dance is an important and exciting element that proved to be a strong force behind the burgeoning Swing music.

The dance became popular through dance groups like the Whitey’s Lindy Hoppers, who brought the style to stage and screen in the 1930s and 1940s. Frankie Manning was the leader of the troupe, developing the first aerials (acrobatic lifts and air steps synchronized to the music). An excellent and most famous example can be found in the movie Hellzapoppin’ from 1941, which lists Whitey’s Lindy Hoppers as the Harlem Congeroo Dancers in the credits. Dean Collins can also be seen in this film, a key figure in the development of Hollywood-style Lindy Hop, an adaption of the Lindy Hop to suit the tastes of white Hollywood.

The first swing dancers in Germany were mainly teenagers, older highschoolers from educated families, but also kids from working class families that had access to radios and record players. In cities like Hamburg, Berlin, and Vienna, the Swing Jugend (Swing Youth) entertained Jazz bands and organized dances, contrasting the widespread Nazi mentalities with their long hair and English-looking clothing, coats, hats, plaid jackets, and umbrellas. Their German slang was spattered with English words and they generally flaunted a joyful and cosmopolitan lifestyle, all relatively apolitical. Despite this early disinterest in politics, they soon became targets of the Gestapo and the Hitler Youth Brigade, making an involvement in the politics of the era unavoidable. The Nazis declared Swing music a degenerate art form, but were nonetheless unsuccessful in fully eradicating it from the subculture. It wasn’t until the war had come to an end that Swing was able to unabashedly enter mainstream culture, spread by the occupying forces of the U.S. Army.

After an extended decline in interest for couples dancing during the 1970s, Lindy Hop began to regain popularity in Europe and elsewhere in the 1980s. By 2005, there was a large community of dancers in London and New York as well in many other – mainly Western – cities, although the trend extended elsewhere, going all the way to Peking and Tokyo. Dedicated to rediscovering the dance, fans practiced enthusiastically and began to organize parties, events, and festivals. The most well known festival is located in the small Swedish village of Herräng, with thousands of dancers from all over the globe gathering for five summer weeks of dancing. Founded by the Harlem Hot Shots (formerly the Rhythm Hot Shots) in 1982, the dance camp is wholly dedicated to African-American dances, with the Lindy Hop well in the spotlight. Original dancers from the 1930s to 1950s, such as Frankie Manning (†2009) and Dawn Hampton, were invited here to gather, teach, and join the new wave of dancers. There are now regular Lindy Hop exchanges and workshops in numerous cities, devoted to connecting the dancers and dance styles of all areas.

“We fought a war with music and dance, and that’s what opened the doors.”